My synopsis is looking a lot better (thank you, Lynn).  She pointed out an answered issue within my synopsis, that turned out to be unaddressed in my manuscript! So I came up with a solution to explain it, which makes some motivations stronger as well, and made all necessary changes. Very exciting. During the process, I came up with an alternate title if “Emergence of the Fey” needs to be changed at some point.

It's officially Spring! And what happens? It snows… and not a sprinkling, melting as it hits the ground, but a few inches on the ground yesterday, and still there this morning. Very cold waiting for B’s bus yesterday, with all the snowing and blowing.

On another note, didn’t get many of my goals done. My youngest sister had spring break and came up Wednesday night, stayed until Sunday morning. I’ve spent most of my writing time focusing on my synopsis and making small revisions in EotF. And, hoping to move this summer, we’ve been working with a great realtor and actually went out to look at some houses for the first time! Very exciting. In short, Life trumped writing this last week.

Ramblings of feywriter at 8:04 AM 4 comments:

I have to say this one is very accurate. Nostalgic, whimsical, needs romance. So me! I want chocolate…


622. What is the tackiest object in your home? The ancient, falling apart dresser that was old when my sister got it; she used it for many years before it got handed down to me. It is one item that won't be coming with us when we move. We can't even use one of the drawers, it's braced so that it won't fall into the drawer below it. And the bottom keeps coming out of another. Chipped wood, nails that keep inching their way out. It's quite a sad thing to look at.


623. What do you think people are most ignorant towards? other cultures


624. What is it that makes you an interesting person? my openness, quirks, and contradictions. as a reader, feel free to comment on this :-)


625. What makes other people interesting to you? contrast - those unexpected things you learn about a person, the reasons behind why they do something


627. Is Michael Jackson black or white? who cares? how many people are entirely one race or color (especially in the USA)?


629. What’s the most unusual pet you’ve ever had? does an imaginary pet count? if so, I had a herd of unicorns in first grade. discounting that, our family had a corn snake once.


630. Have you ever threatened an authority figure? no


631. If you had to choose would you rather make all your decisions henceforth with your head only or with your heart only? my heart.


632. How imaginative are you? very. I'm a daydreamer, a writer, a lover of fantastic ideas


633. Do you like the Counting Crows? I haven't listened to much of their music, but I am doing so now and pleasantly surprised. so, my answer is yes.


636. Does your happiness depend on anyone else, or are you happy no matter what any one says or does? Dependant on others. I don't want my happiness to be completely independent. Though there are times I wish I was affected less by other people's comments.


637. What do you think of the idea of putting the bible into the format of a fashion magazine to attract the interest of teenagers? The wording is the issue, not the format.


639. Would you consider yourself to be diplomatic? I'm one that likes to try, but I don't know how successful I am.


640. Do you think that most of the classes you have taken were taught in such a way as to make plain the relevance of the subject matter in your everyday life? most yes, but I tend to avoid taking classes that do not seem relevant to me

Ramblings of feywriter at 10:45 AM No comments:

I thought my synopsis was down to five pages. I did some digging to find out the preferred format, and learned the agent wants double-spaced... like the manuscript, not the query. Ouch. My five pages inflated to nine. My husband has given feedback from an insider's perspective. I've hacked away, and the synopsis is currently six pages. I'm sending it to someone who hasn't read the book, to see if it makes sense and hopefully help me tighten it some more.

Going to get deeper into my MC's head, give him more character quirks.

Happy Saint Patrick's Day! Anyone know the origin of pinching someone for not wearing green? Strange tradition... It's amazing how wide-spread this Irish holiday is. And here is some Luck of the Irish for you, from a cute and cuddly bear. 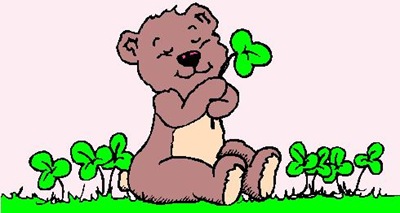 Ramblings of feywriter at 10:42 AM No comments:

What Body of Water Are You?
I've always enjoyed personality quizzes, such as above. I'm going to start putting one at the beginning of each 5k Q post, as they are all about getting to know me.

601. Do you have a lust for life? using as a definition: a strong determination to enjoy life as much as possible. No. I worry too much.


603. Would you want to learn to:
Convert to Buddhism? no

Cure a hangover? no
Lie persuasively? no. I'd be way too tempted to lie more often.


604. What character from a movie is most like you? Alright, I'll resort to another personality quiz. I am...

You are always daydreaming of far-off places. A bit naive sometimes, you have a vivid imagination and your heart is pure. And you know that there is no place like home.

605. Are you comfortable with the idea of your own death? no. It would devastate my family, and I'm certainly not ready to die. But what scares me more than actually dying is the pain that would most likely precede it.


606. How do you feel about arranged marriages? They can work, but the key there is work. I think a person has a better chance finding a compatible match on their own, than being arranged by parents or some other party. Chemistry is something that cannot be predicted. The "perfect match" on paper does not always work out.


607. What do you hate that everyone else seems to like? shoes


608. What do you like that others seem to hate? dandelions


609. If you had to be named after a month, which month would you pick? June. Not as common as April, but not as strange as November.


610. Is time more like a highway or a meadow to you? Mostly a meadow. Living in the now, able to observe both ahead and behind. Occasionally, the highway will barge through and drag you along, giving you no choice but to keep eyes on the road ahead and keep moving so you don't become road kill. But the meadow moments are definitely preferred.


611. What is your favorite movie? Robin Hood Prince of Thieves


612. Which would you choose to be back in the day: a warrior, an alchemist, a minstrel, a bard, an oracle, a peasant, or a merchant? a bard


613. What is your favorite song lyric? "for the good of all of us/ except for those who are dead". from Still Alive, the Portal credits song. So awesome. And I can sing it on Rock Band. Even more awesome.


615. If you could force someone to fall madly in love with you, (anyone you choose) would you do it? No. For a couple reasons. One, if it's forced then they don't truly love me for me. Two, the 'madly' part could have unwanted consequences. They may end up completely possessive (see the movie Prom Night), or protect me in ways I don't need or want (as in Terry Goodkind's The Sword of Truth series (haven't read the books myself, but heard about them, and watched some of the tv series based on it, The Legend of the Seeker)).


616. Have you ever seen the Disney movie The Black Cauldron? yes


617. Have you ever read The Black Cauldron by Alexander Lloyd (or any of his other books in the Prydain Chronicles)? yes. Loved the books. Movie seemed strange; been too long since I read the books to say how accurate it was.


619. Is there a movie you have watched so many times that you can quote it line for line? No. I may be able to quote some lines, but my memory doesn't hold the bulk of a movie like that.


620. What is your favorite season? Spring. I love the blossoms, the rain, the warming days, with nights still cool enough to snuggle down under the blanket. The promises of new life, new beginnings. The world is so fresh.

Prepping next batch of queries (most wanting synopsis), so they are ready when my synopsis is. (That word is looking stranger every time I type it.)

Didn't add anything new to either story, being so involved with previously mentioned synopsis. Need to get that thing out of the way so I can reach my word count goal here.

Currently on back burner. Which means I jot down fragments and notes as they come, but no proactive document opening.

Now that I'm away from basic colors, these are getting tougher! I have five colors on my idea list.

Current synopsis is 13 pages long of summary... Now I need to transform that into an entertaining (and much shorter, as in 5 pages range) form. I'll keep working on it each day. Cut, cut, cut. Down to the main plot basics.

Ramblings of feywriter at 4:05 PM 2 comments:

No queries out! Must remedy...

General goals over the next couple months (March and April) are to add a minimum of 16,000 words to Trinity Coven, and revise and submit at least one poem a week.

There are so many things I want to do, so many groups I want to be a part of. But I have to learn balance. Goals are great, but I'll only get depressed if I overextend myself. Sometimes I need a reality check. Of course, I could also get more done if I procrastinated less.

Made good progress on TC yesterday. I have a clear picture of where the next few chapters will be going, so that should help my writing goals.

B's birthday is this Sunday. He's already super excited. We let him pick out what type of cake and frosting he wants. It will be a very simple cake. I'm not the expert my mom is. But I think he'll have fun helping me make his cake this year. He'll be turning five years old. He's been saying he's five years old for a few weeks now, LOL. It will be true soon enough. =) We bought him the movie "Scooby Doo Meets Batman" (two of his favorite characters) and a building bridges logic game. Not much, but he's already received two new board games since Christmas. We buy quite a bit for him throughout the year, so it's easy not to go overboard on holidays. I can't believe B will be in Kindergarten next year! My little boy is growing up.