Proud to be an Introvert

Shrinking Violets posted about Dispelling Ten Myths About Introverts. I encourage all to go read it. Introverts have misconceptions about themselves as often as extroverts do.

The one that irks me the most is that as an introvert I am anti-social. Not true!

Quite the contrary! We have many close, dear friends, but we also recognize that being with people just for its own sake does nothing for us and, in fact, drains our batteries right quick. We love to connect with people, but not just mingle with hoards of people for its own sake.

I love going to big social events, I just get overstimulated and fatigued if I stay too long. It doesn’t energize me, it drains me. Too many social events in a short period of time can do the same thing. I like that I have been more socially active this year, but still need to balance it with ME time, which does NOT involve interacting with others.

This is the book that never ends

I've been reading CHARACTERS & VIEWPOINT by Orson Scott Card. The part that's really helped me figure out what's wrong with my first novel is on story type. There are four types of story, summarized by MICE: Milieu (setting), Idea, Character, and Event.

"Within the first few paragraphs or pages, you tell the reader implicitly what kind of story this is going to be; the reader then knows what to expect, and holds the thread of that structure throughout the tale."

My story is apparently a Character type story, but the opening doesn't reflect that. My first version opened with a dream, which would reflect an Event story. Currently, it opens with describing the setting, culture. That's more fitting of a Milieu structure. I'm starting in the wrong place for this type of story. I need to start where Marian realizes her world has changed and she no longer belongs where she’s been. Her moment of change, not anything that has to do with the Enchanter/Fey conflict.

Cutting most of the first three chapters would also help with the problem I got with my last rejection: the opening is too slow. It will also get Marian meeting Jex sooner. Win-win. When my husband offered to read through my story again, I had no idea if I even WANTED to look at it again, let alone have a clue how to revise it. I was so sick of my story, I was ready to not just shelve it but burn it and bury the ashes. But now that I have ideas to fix it, it’s interesting again. Will I ever be done with this story??

Ramblings of feywriter at 1:23 PM 2 comments:

A few minutes ago, I heard the door bell ring. Not expecting company I opened the door expecting a salesman of some sort. Instead, I got greeted by a woman holding this: 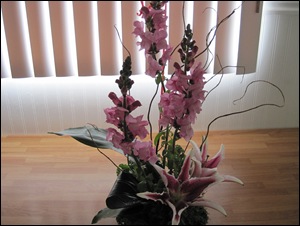 Aren’t they beautiful? My husband still has the power to surprise me. We’ve definitely come a long way as a couple in the last few months. Thank you, dearest husband, for brightening my day.

I am a Renaissance Soul

About a month ago, I read a blog post that really spoke to me. Are You a Renaissance Soul? Use It to Your Advantage. I easily answered yes to the initial questions. Once again, I am recognizing and accepting. I took some time thinking about my answers to the rest of the questions posed, and here’s my musings.

How long can I work until I get antsy?

An hour at a time. Any more than that and my attention wanders. On a day to day basis, NaNoWriMo has shown me that I tend to get distracted after about two intense weeks on one project.

How would I react if I was told that I had to work on 1 thing until it gets done?

My urge would be to rebel, and every other project would seem more exciting than the one I have to do. I don’t like should and have to. I would likely have a secret project to at least make notes on.

What about 2 things? 3? 4? Find your optimal number

Four seems to stretch it. I wouldn’t be making enough progress to make it worthwhile. With two I’d still risk getting bored. So three feels like it will be a good balance.

Where do you feel the biggest sense of accomplishment/happiness/growth: starting a project, working on it, or finishing it?

Working on a project. I thrive off that sense of progress. The process of creation. Seeing my ideas come to fruition. I love the sense of discovery, all the things that surprise me despite having plotted the basic story. Starting is always hard, intimidating. Finishing may have a nice rush, but it’s accompanied by a sadness as the story is no longer new and fresh to my own eyes.

What structure will let me live in that place the longest?

After answering the previous questions, I believe I will be most comfortable working on three projects at a time. Since I have the freedom of not answering to an agent or editor, I can get away with multitasking.

As super excited as I am about Twilight Rain, I’m going to let that one simmer a bit longer. Finish at least one of my other projects first. I have three stories that are hovering around the 30,000 words mark: Trinity Coven, Race to 100 Deaths, and The Minotaur Staff. It will be an awesome rush if I can make progress on all three of those each week. By some logic, it will take me longer to finish a WIP this way. In reality, it will be more productive to switch between projects when I get bored or stuck, rather than stress over one story and go a month or more without writing anything.

Ramblings of feywriter at 11:11 AM No comments: