It’s been very hard to focus on TC this past week. My other projects have been calling. Enticing me to wander. Like yesterday - I read through all sixty pages of the unfinished Rt100D. It was my first time reading any of it since writing it during NaNoWriMo, and I was surprised at how well it held my interest.

Then there’s Sienna’s Story. It’s the least structured of my novels so far. I have a clear conflict, but don’t know where the story will take me. I want to know what happens next. With the family focus (MC is a mom of two, separated from her crazy husband), it has such a different dynamic from anything else I’ve done.

I don’t know if I need an official break from TC, or need to focus that much more. Maybe my self-imposed pressure is getting to me. Maybe it’s the dreaded mid-story block. I open the document and feel uninspired. Uninterested. I could jump ahead to a more exciting scene, or allow myself to dabble in a different story. Either way, I need to get my fingers moving over that keyboard.

I had forgotten how crippling my Spring allergies are here. Sneeze, wipe watery eyes, sniffle, blow. Even with allergy medicine. We have a nice HEPA air purifier, which I crank up to high after being outside. I think the sinus headaches are the worst. Even when the other symptoms subside, that sinus pressure keeps pounding.

I didn’t get all my scenes in, but did make progress. Keeping my expectations low this week. Hoping the storm later this week will lessen the pollen in the air, so I can be more functional.

Ramblings of feywriter at 2:28 PM No comments: 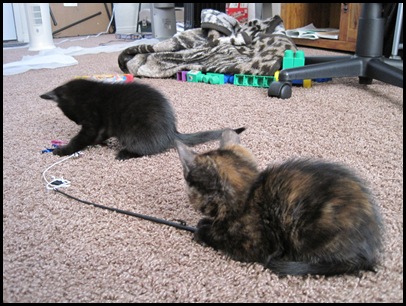 Meet the newest members of our family. 7 week old Topher and Priya.

The black one is Topher. The tortoishell is Priya.

And a second photo, just because. 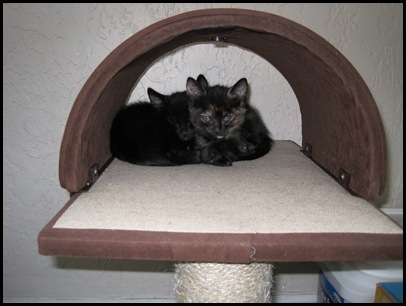 Priya is our little princess. Once she got used to us, she loves lap time. Try to put her down before she’s ready, and she doesn’t hesitate before turning around and climbing back up. She’s also quite the explorer. All dusty from excavating behind computers and under couches. Climbing as high as she can, and discovering all available cubby holes. When not getting attention or exploring, she is napping on top of her brother.

Topher is mellow. He needs his sister. When they were first exploring the house, he would start meowing if he realized Priya had wandered into a different room without him. Always looking for her. If they both want to play with a toy or box, he defers to her, waiting his turn. He likes attention, but doesn’t demand it as much as Priya.

These two were the last of a litter. We had already talked about getting two kittens this time around, and instantly fell in love when we saw them. The family we bought them from was surprised when we said we wanted them both. If we hadn’t taken them, they likely would have been separated. Priya would have been fine on her own, but I think Topher would have had a much more difficult time adjusting.

Ramblings of feywriter at 1:07 PM 4 comments:

This is a poem I wrote in high school. One of my favorites from those years. It was inspired by a prompt where you swap around common adjective/noun combinations to create unique descriptions.

I wander in the hungry rain.

The green clouds in the stormy sky

Light the lazy edge of the sidewalk

And my dog a dusty wolf

Hesitating when he finds himself

In the depths of their dim waters.

But I, in my new galoshes,

Lose myself in the worn rain.

Three and a half of the four goals complete. Not bad.

Scary how many of those bookmarks were for pages that don’t even exist anymore. Took a long time going through them all, but now that it’s trimmed down to what works, and what I’ll actually revisit, it looks so much cleaner! Maybe I’ll actually visit the bookmarks I have left.

If I average one scene a day in Trinity Coven during the weekdays, I should be on track. I’ve got a new writing routine which seems to be working. I’ll blog about that another time.

Another thing I need to do is clean house! One of my sisters is coming up Friday to hang out. Looking forward to it!

Is there anything you’re looking forward to this week?

Sarah Wylie is celebrating a publishing contract for her novel All These Lives. Multiple prizes, and multiple winners. With partial critiques, query letter critiques, a survival guide with books and other goodies, and even a chance to win a lunch date with two agents, there’s something for everyone!

So what are you waiting for? Go enter now! Deadline is Sunday April 25.

Email ThisBlogThis!Share to TwitterShare to FacebookShare to Pinterest
Labels: contest

I’ve got my new blog look up. May do a little tweaking, add another tab or two, but nothing major. Thank you to everyone who gave feedback. Background, Twitter button, and header image came from ShabbyBlogs.com. All the coding and editing was done by me. Headache, but I learned a lot. And I’m really happy with the result. It’s more me, rather than going with a premade layout.

Ramblings of feywriter at 3:45 PM 3 comments:

Email ThisBlogThis!Share to TwitterShare to FacebookShare to Pinterest
Labels: blog

In honor of National Poetry Month, April’s Thursday Tales will be poems. This is one of my more recent creations:

One hand on the frame

I lean out, fingertips tingling as they stretch

on the scent of flowers

I can almost taste the rain

Wind whispers in my ear

If I did not believe its truth

I would throw myself

to kiss the earth never touched

or strangle my pale neck

with the curse of my hair

only a bit longer

I cannot live another winter

(**changed blog layout to a clean, nice-on-the-eyes, default template. still looking for what I want long-term, so feedback is still welcome)

With the new tab options integrated into Blogger, I’m considering giving a makeover to my blog. Fits well with my Spring Cleaning theme this month. Anything I should consider regarding font size, colors? Anything you hate to see? Preference over two or three columns? Are flowers a turn off for the guys? In the end, I’ll be going with something that works for me, but I don’t want to turn you away!

Ramblings of feywriter at 2:30 PM 3 comments:

Email ThisBlogThis!Share to TwitterShare to FacebookShare to Pinterest
Labels: blog

Trying to get back in routine. This month’s theme is Spring Cleaning. As a family we’ve begun tidying up our house and yard. We actually put up wall hangings! For my personal goals, I plan to clean and organize my virtual and physical work space. Each week I will focus on something specific.

I came nowhere close to finishing Trinity Coven by the end of March, so we are going with my reserve deadline of June 4. Spring Break was a preview of how much harder it will be to make writing and me time once summer comes. I’ll have to re-evaluate and determine how much I need to write each week to make it possible.

Ramblings of feywriter at 1:00 PM 3 comments:

This last week was an interesting one. B was sick for a week, staying home from school Monday and Tuesday. I didn’t have to worry about missing school the rest of the week, as it was Spring Break. Tomorrow he goes back to school (yay!).

My wrists were also hurting, so I took a break from writing and video games to give them a rest. (Thus the lack of blog updates.)

What did get done was house stuff. And I got a lot of reading done. B did as well. Just prior to Spring Break was parent teacher conference. Since B is doing so well in school (going to start some first grade level work), we bought him an early reader at the book fair. This is the first book that is really meant for his reading level, and he was excited to read it to me. Made it easy to get some reading in even though he was home sick.

B is very demanding when he’s home. Not just because he was sick. Wants Mommy to be involved in everything. I don’t want to know how many board games we played. Or video games on Monday (which probably contributed to the sore wrists).

Before school gets out for the summer, I will want to create some sort of routine, for everyone’s sanity.

Thankfully, B seemed fully well by Easter. Had plenty of energy to play with his new foam dart gun and rocket launcher. Of course, as soon as B gets better, I start to feel sick… One more day of Spring Break to survive.

How was your Easter?