My Experience with "Diet Right for Your Personality Type"

I started a 4 week diet plan in mid October, so I would end just before the holidays. The book that got me started was one I saw on display at the library and checked out: "Diet Right for Your Personality Type" by Jen Widerstrom. 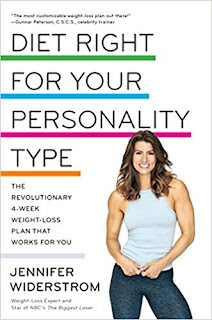 She breaks everyone down into 5 types.


I'm not going into the differences, but here's a great article that does so: Jen Widerstrom Explains Why Weight Loss Tips Aren't Working For You

I'd tried changing my diet before, but always struggled. What I liked about Jen's plan is that she tailors it to your individual personality type to increase chance of success. I took the quiz, and my results fell where I expected: The Never-Ever. My own worst enemy, gives up easily, fear based thinking. This resonated so much with me that I was more inclined to give her diet a shot. Another thing I liked is that her plan isn't about carbs bad, fish good, or anything. More veggies, yes; less boxed and processed goods. Better plate ratios and portions. Listen to your body, how it reacts to different foods, and drink more water. Also about changing your diet long-term, setting you up for continued success after the structured 4 weeks are over.

The initial cost was really high, buying packages of things like quinoa, bone broth, teas, bulk items that I didn't have on hand. My first week the fridge was overflowing with produce. I was surprised how well much of it held up though, and I did buy less on the later weeks. I also had to get a blender, larger teacups, soup mugs to-go, and a thermos for the sipping broth. But I considered it an investment in my health. I made a Pinterest board for the items I ended up getting.

Now, ideally any diet would include an exercise plan. Jen does include workouts, but I focused on the diet rather than the exercise. I did some exercise, but most of my physical activity was just from work. I do have an active job as a library shelver, and I walk and bus. So it's not like I was stuck at a desk all month. I do know I could have lost more weight if I was more active on my days off.

I lost 7 pounds, half of that in the first week. More importantly, I felt a difference physically and mentally. I was less sluggish, took less naps, was able to focus on tasks, even was more creative, feeling more inclined and able to work on my writing projects.

What didn't work for me

I had to adjust some of the recipes, as most of the portions were too big for me. Some I reduced by about a third, others I completely cut in half. I also had to make some substitutions for things out of season or that I couldn't find in my area, or were too expensive (I'm looking at you halibut).

I learned I am allergic to chamomile tea (cousin to ragweed). I really don't like fish, no matter how it is cooked. And brand makes a difference. I have gotten used to Fage greek yogurt, but one bite of an Oikos and I gagged.

I liked having everything planned, and going to plan my own lunches better so I don't throw something unhealthy together. If have a plan, and stick to it, I'm less likely to eat out or binge on unhealthy snacks.

I ramped up my water drinking. Seemed like a lot starting out, but got used to it as weeks went on. Now sweets are less appealing (still good, just can't eat as much), and fast food / oily food doesn't taste as good. Still working on cutting back soda, but trying to drink more lower calorie options like Mtn Dew Ice or Kickstart.

My family was supportive. I couldn't have done it without them. They tried some of the meals with me, and made separate meals the other nights (so many dishes). They were willing to taste most everything. We all cut back on sweets.

We may not have liked all of the recipes, but did keep some to add to our new rotation. Eating healthy can taste good and wasn't as expensive as we feared. We are making changes moving forward, cutting out boxed meals, and moving to more healthy options. And coming up with a rotating meal plan to make planning and shopping easier.

My new goal is to continue eating healthier, and start exercising more consistently on my days off.

Staying with the healthy theme, for my birthday last month my husband bought me a Fitbit. I like being able to track how much walking I actually do, and the reminders to get moving. Default goal is 10,000 steps but that felt too high to start with, so I'm aiming for 5,000.

What choices will you make today to be healthier? 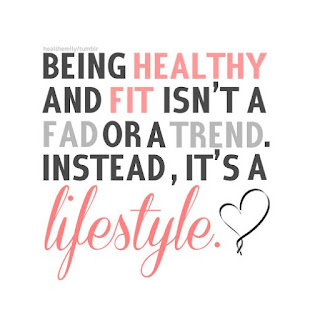 Ramblings of feywriter at 9:45 AM